The ladies with their babies. 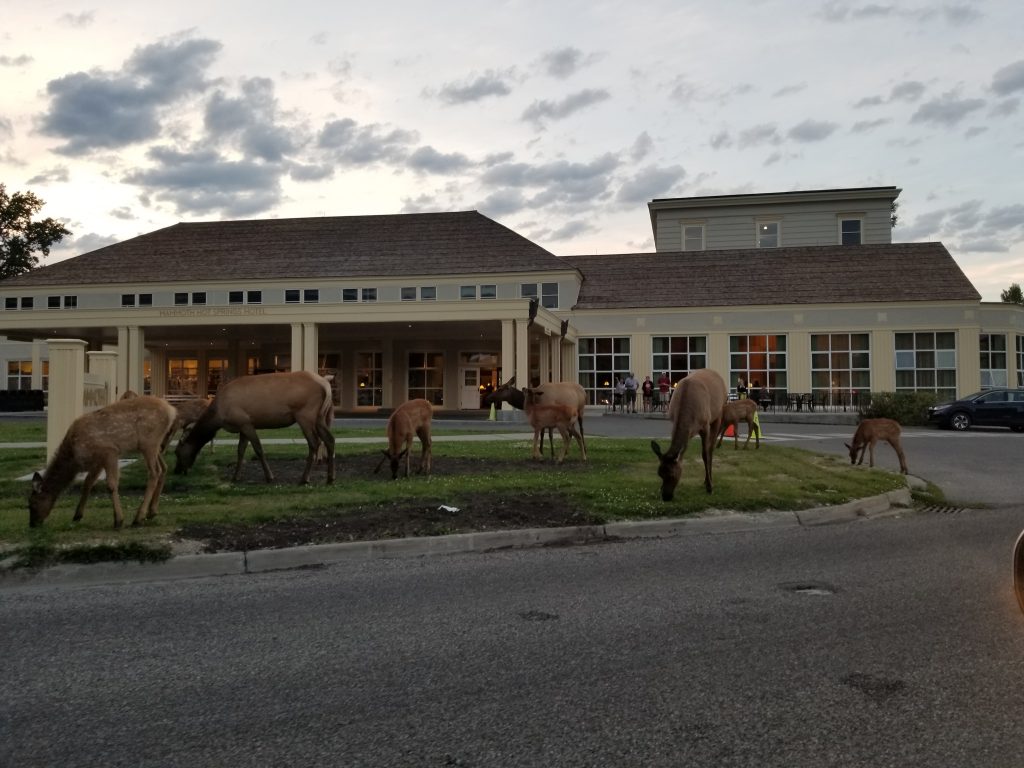 These are the animals in your neighborhood. 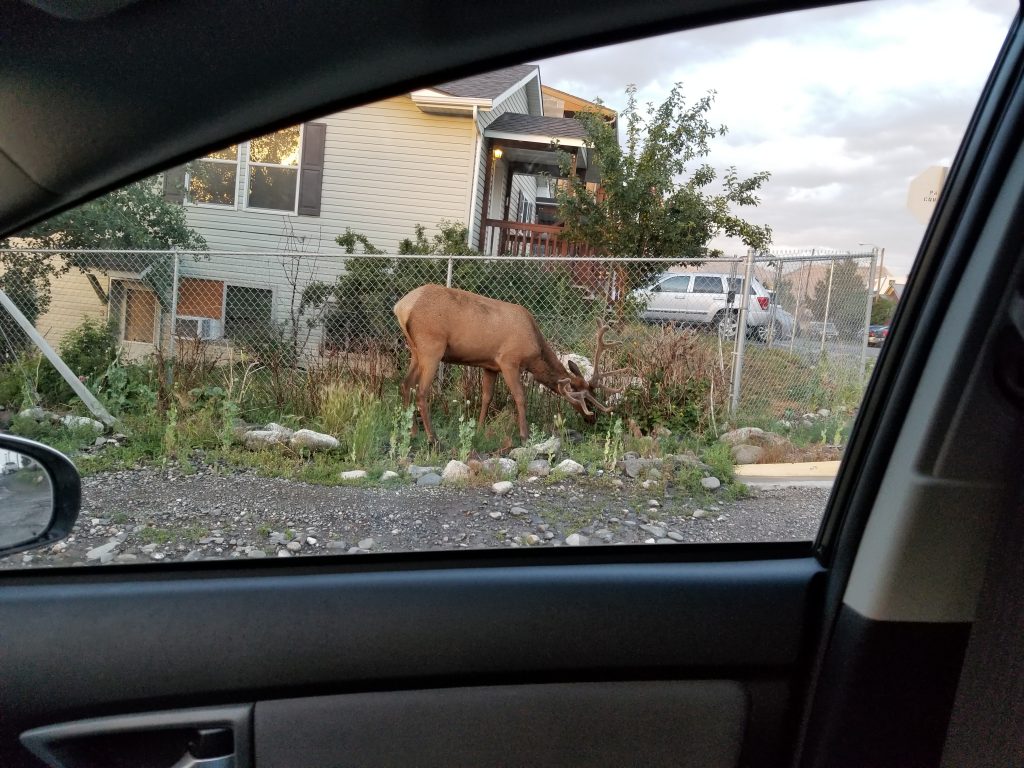 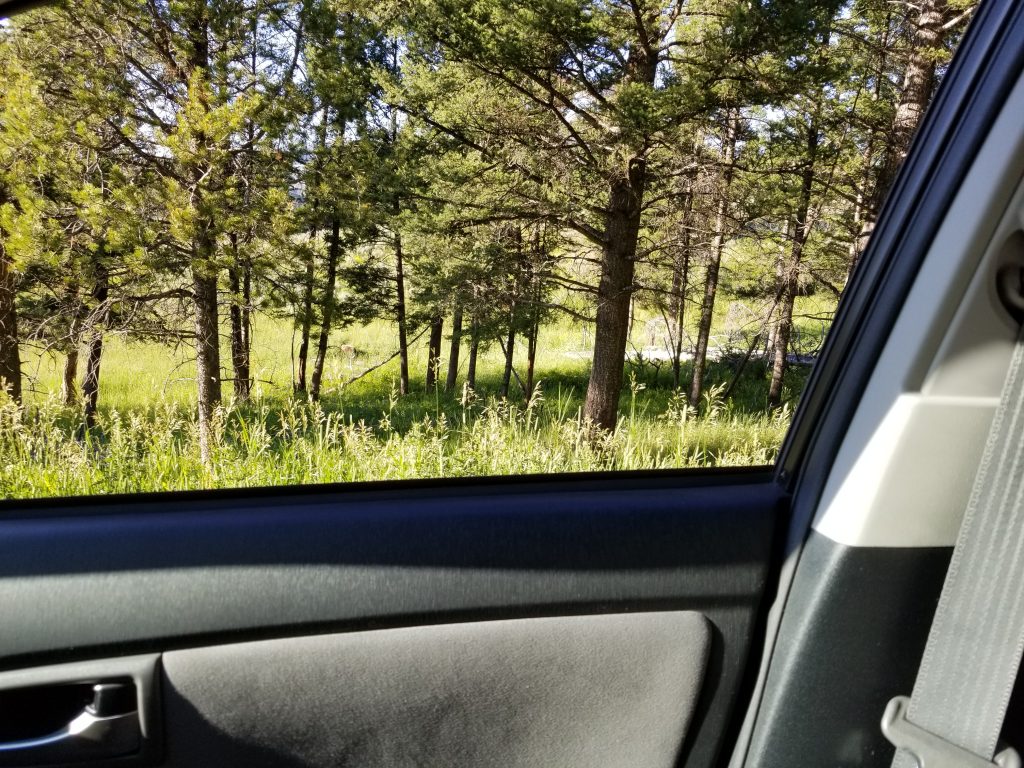 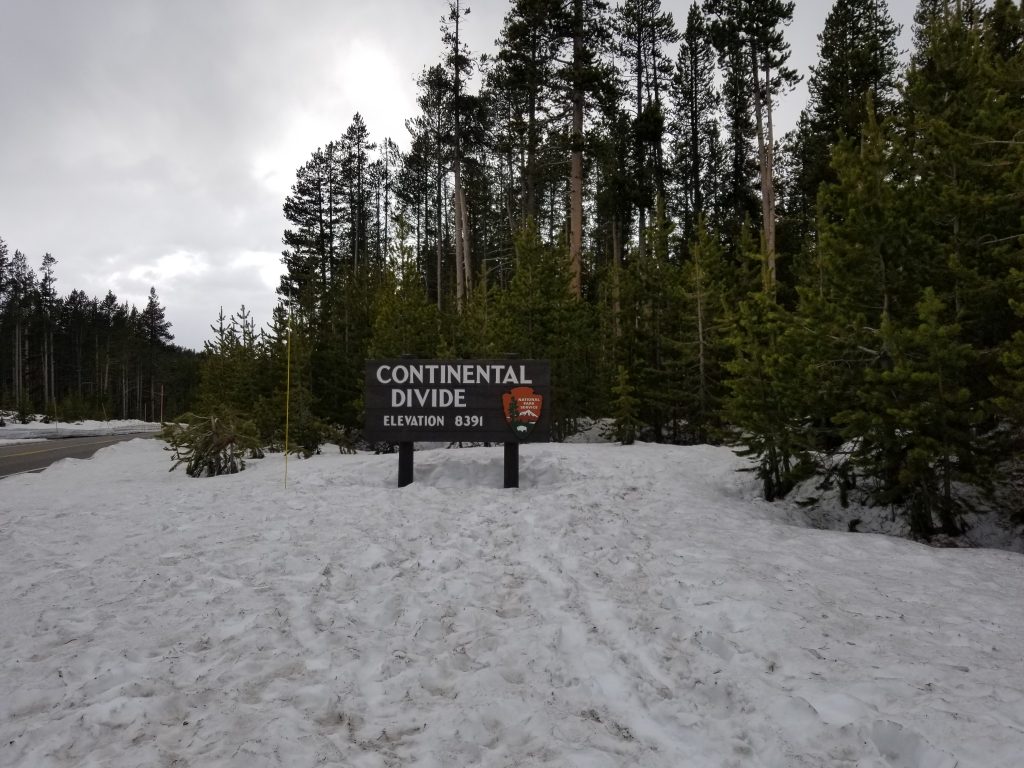 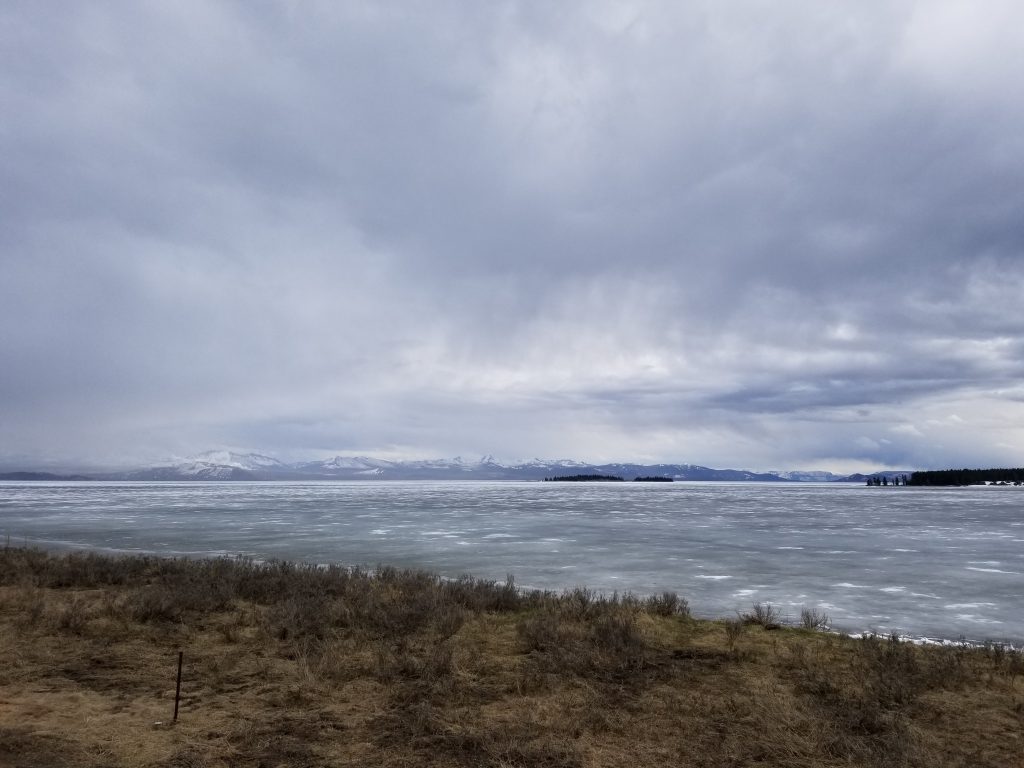 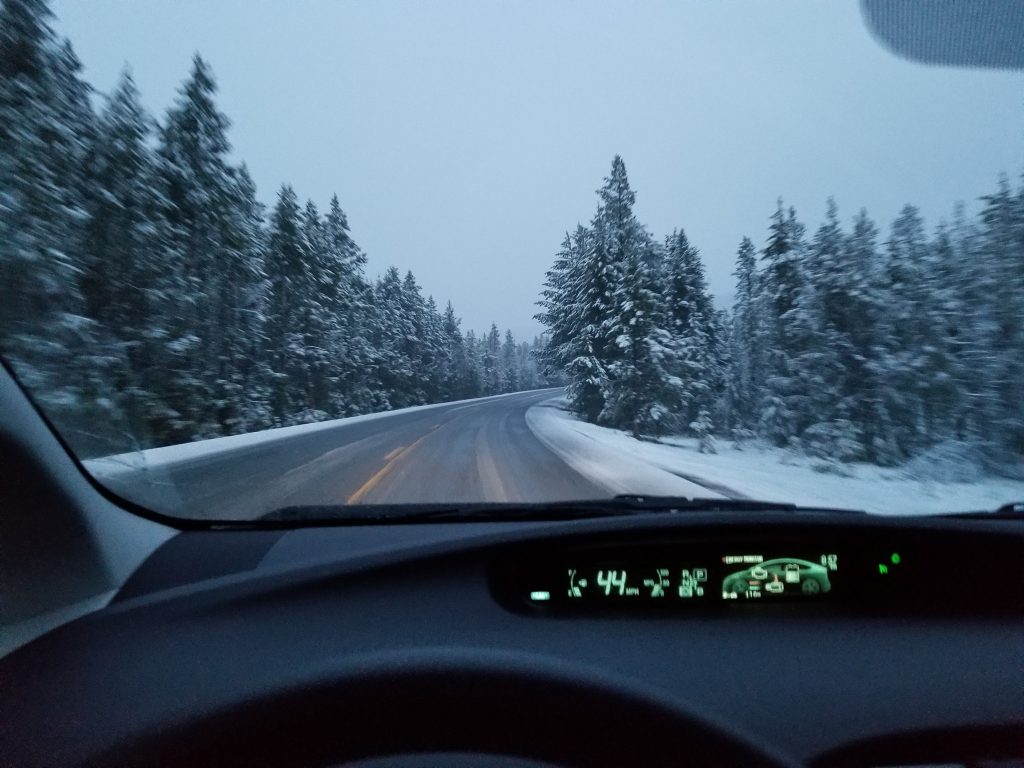 These guys snuggle to stay warm. 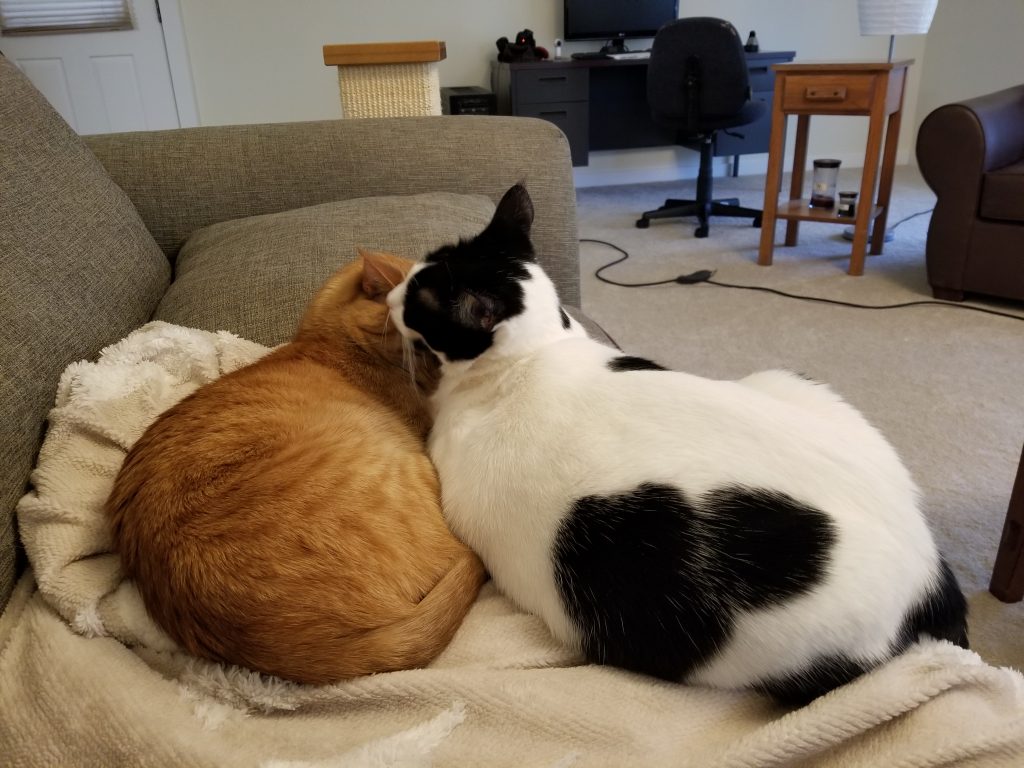 Oh, and a bear a few days before the snow storm just off the side of the road. 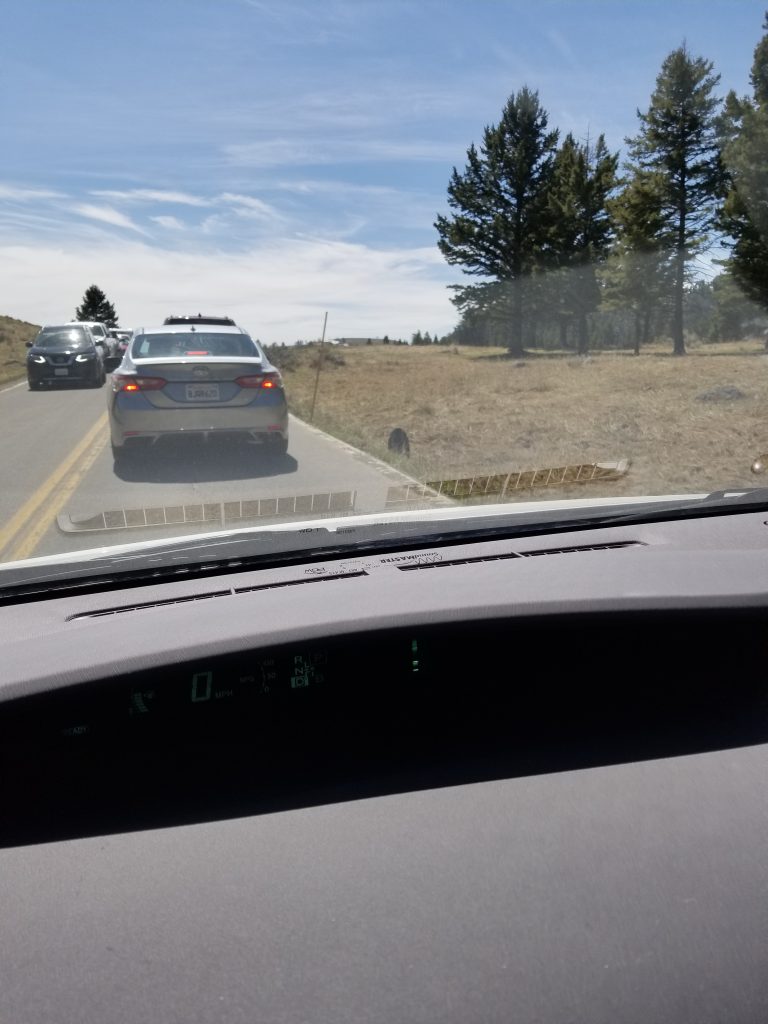 I had a big surprise. My Google personal search list had NoRooomForDoubt.com as one on my recommended readings. How cool is that!

Off to Canyon to do some hiking. Well still a lot of snow. 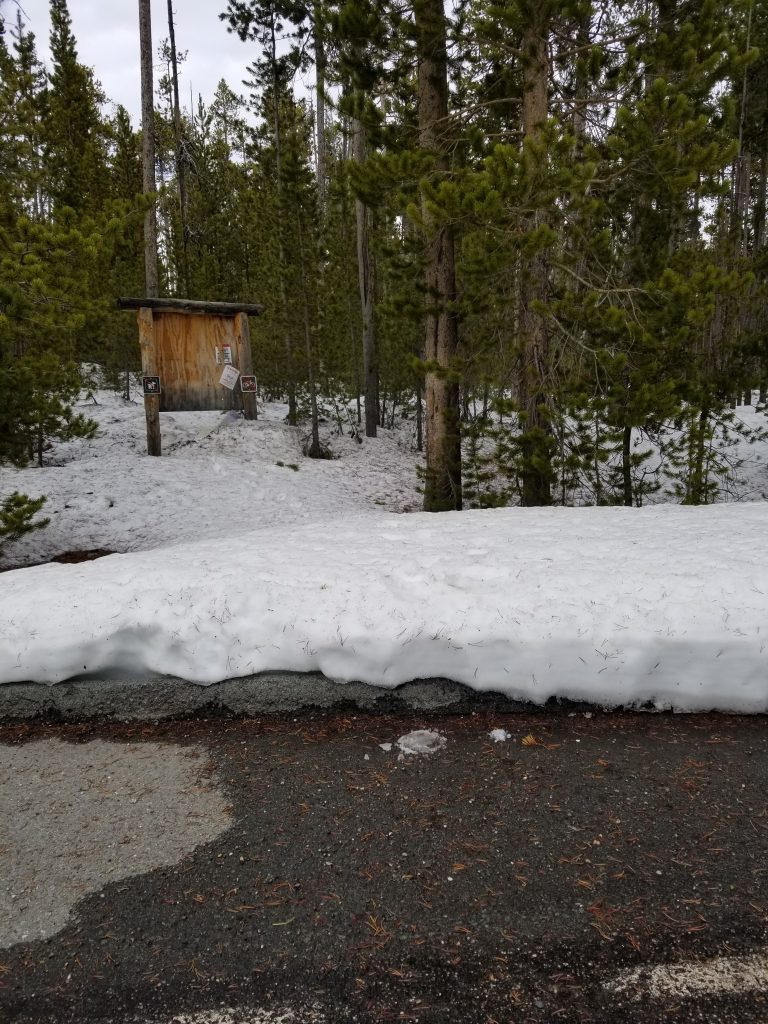 Checked out the warning about bears. I have two cans of bear spray and my bear bells on. Also decide to play some Audible and music from my phone to add some extra sound. 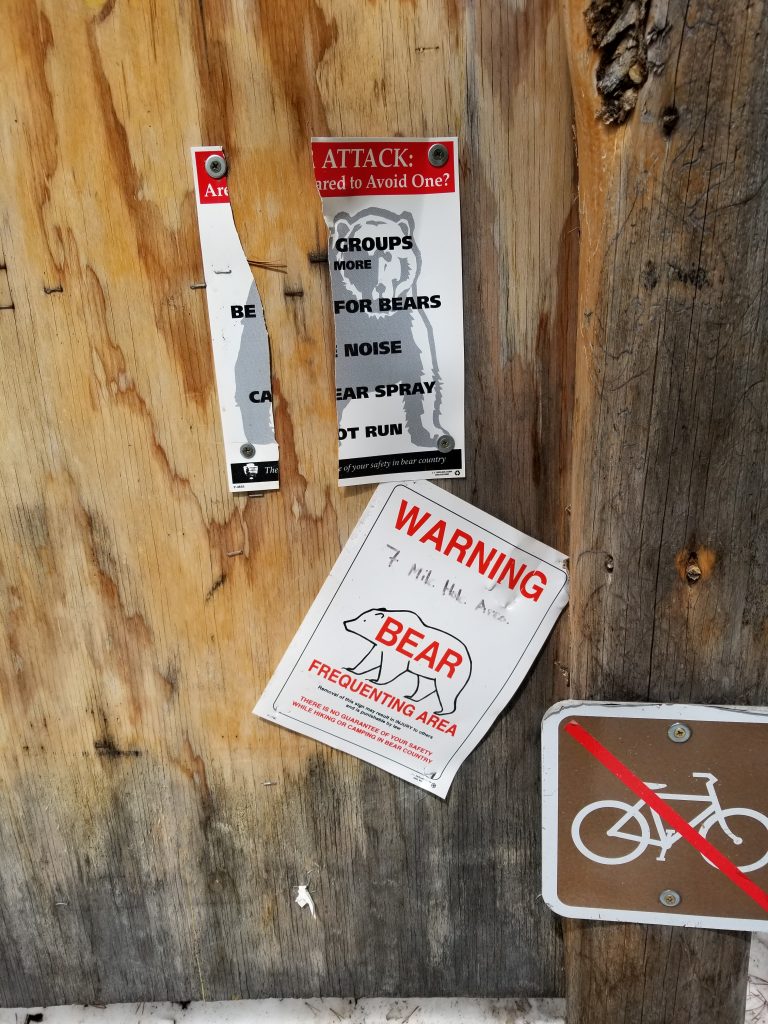 Well the path turned out to be all snow covered. 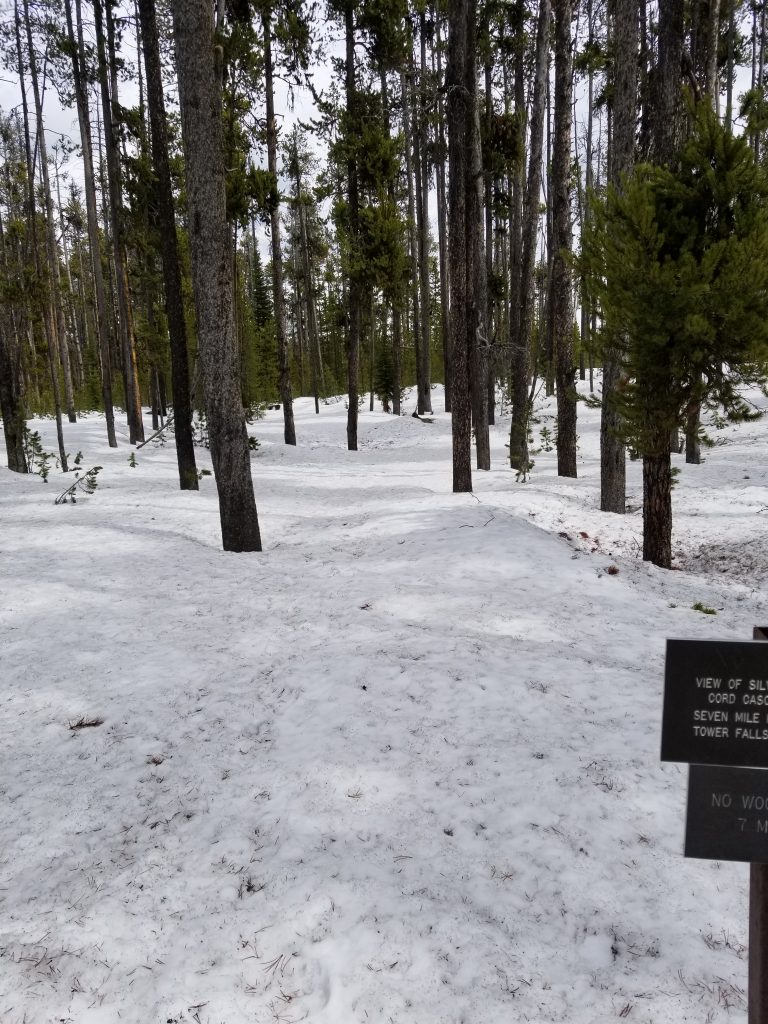 This tree is a visual representation of how I feel inside sometimes. 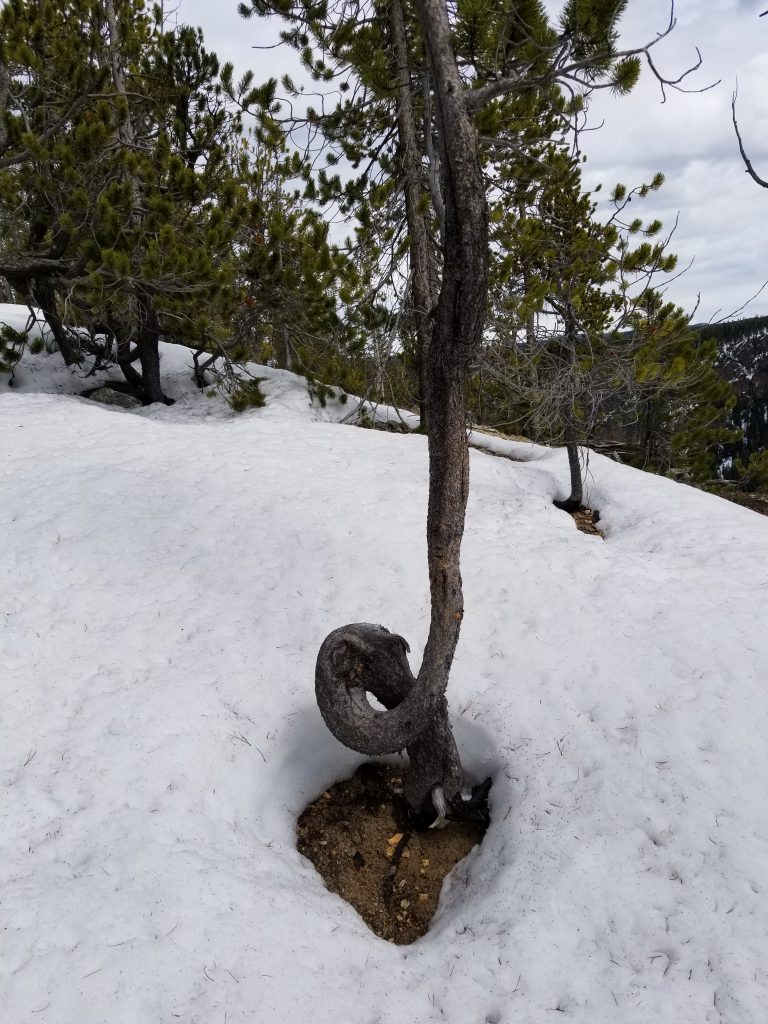 I found the great Toad King. He was too stoic to speak with me. 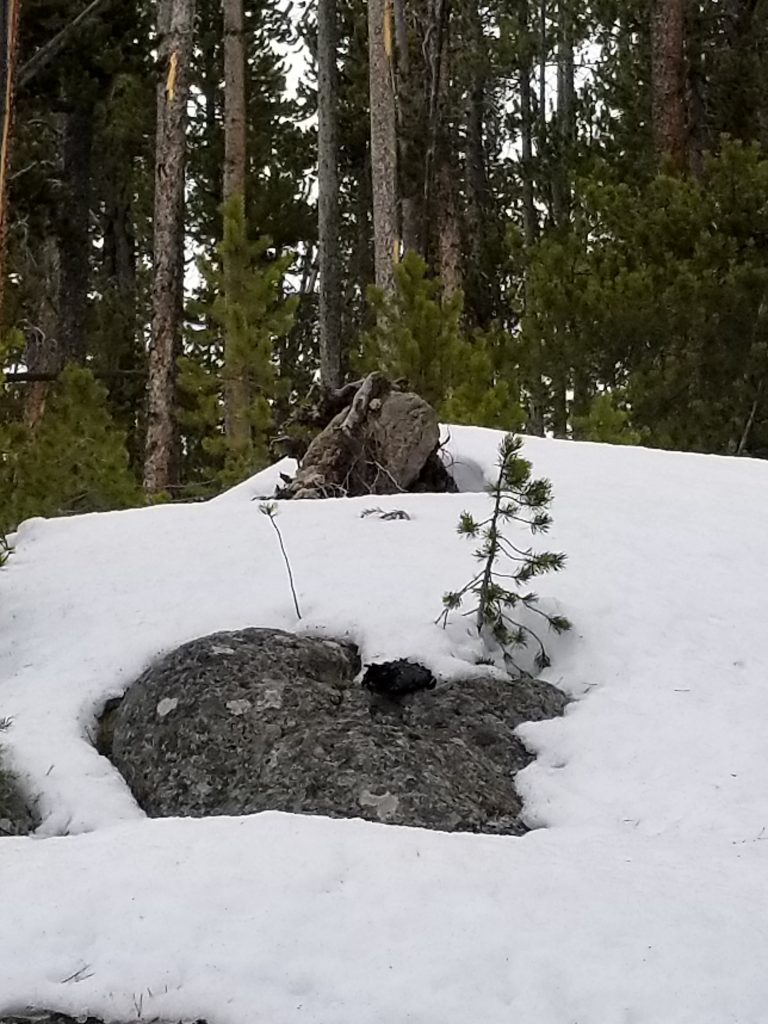 The views were great. 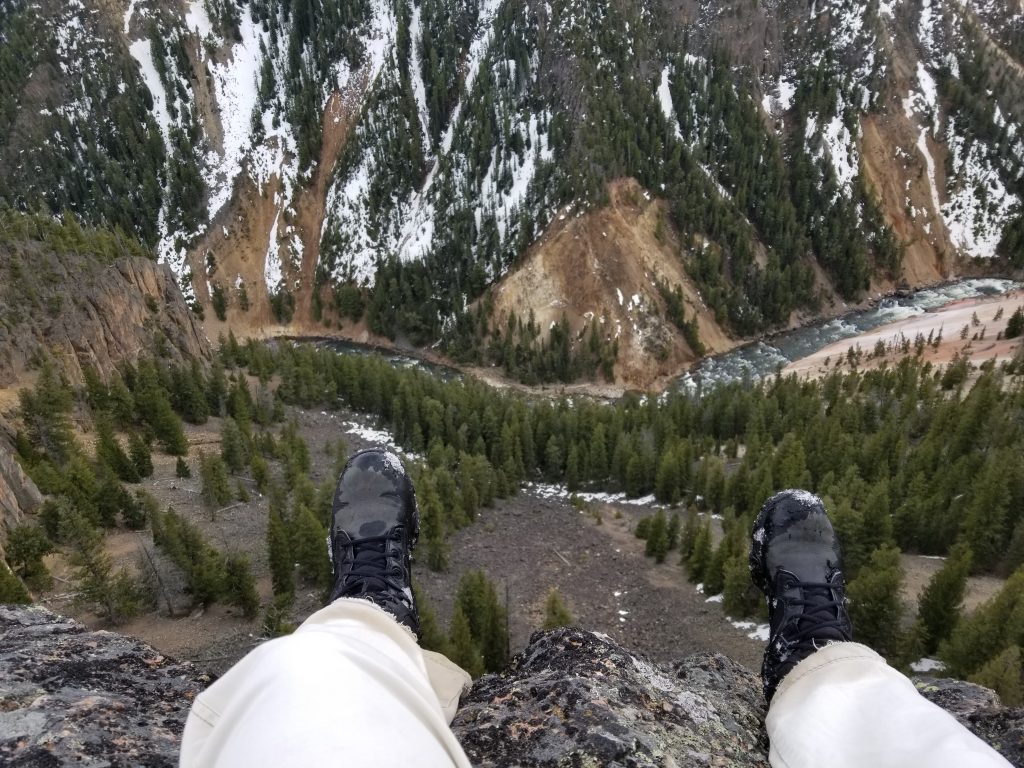 Didn’t see the bear but found evidence. Some tracks were clear in the snow. Also found evidence of does a bear s…. in the woods, but you don’t need to see that. 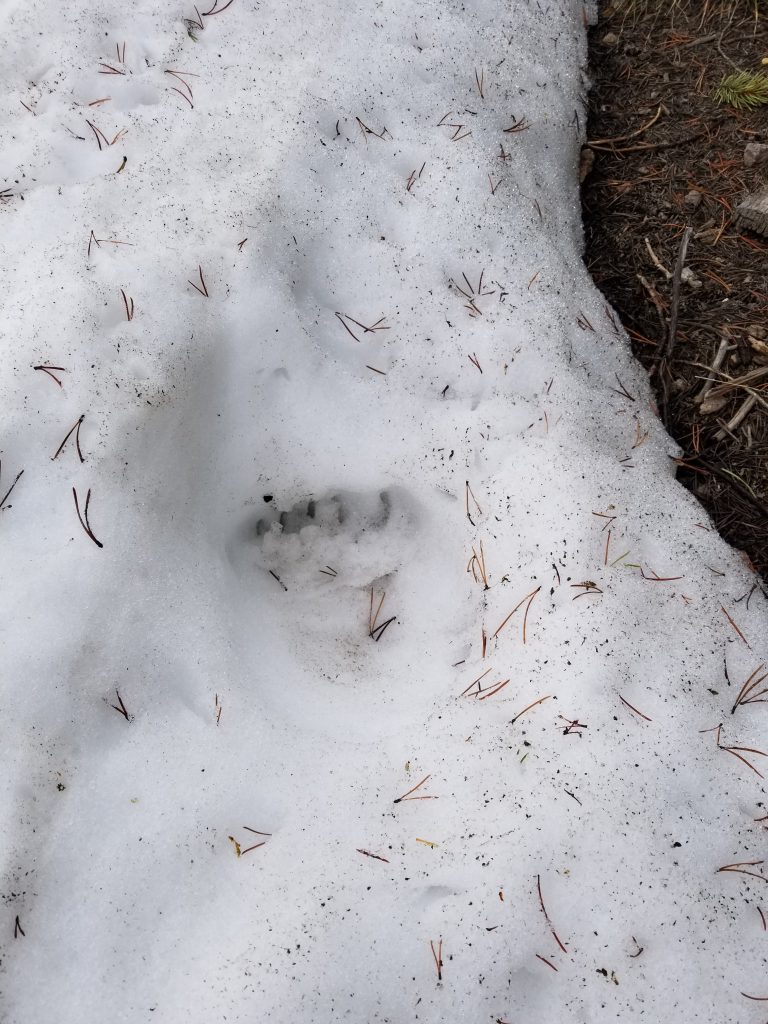 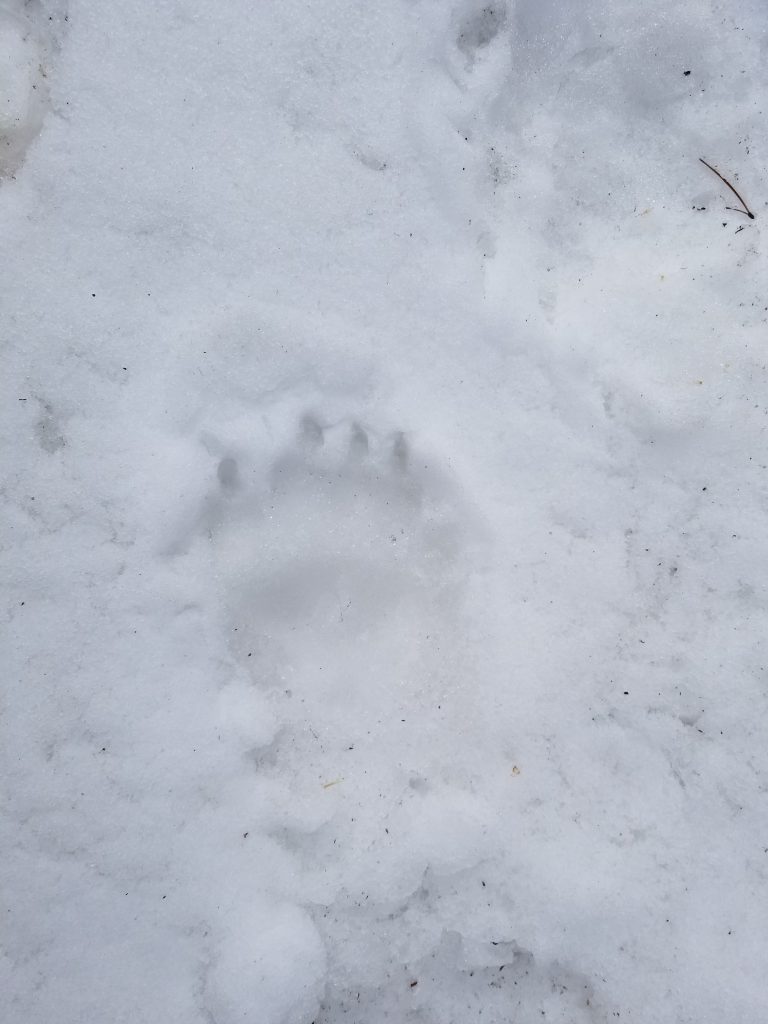 Did a lot of post hole walking so I gave up and turned around. Will have to complete this hike another time. 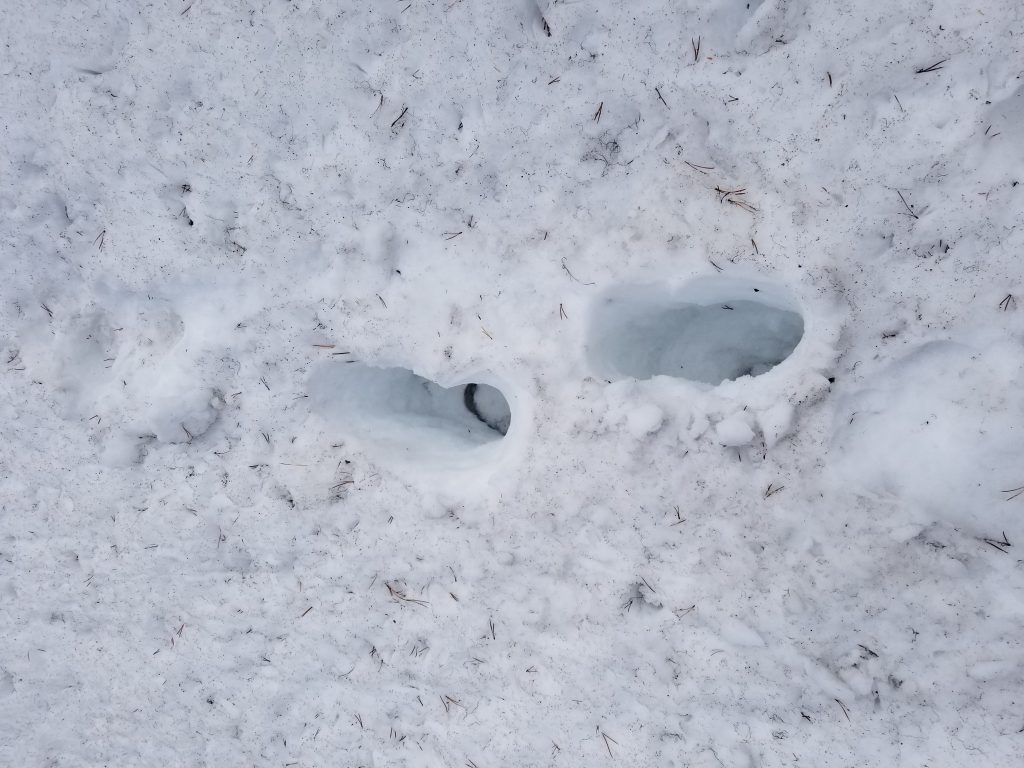 Was notified today that the National Park Service had some Grizzly Bear sightings. Had to have a conversation with Janet today that I never thought I would have with her. How to react to seeing a bear and how to use bear spray.

Male grizzlies come out of hibernation in mid-to-late March. Females with cubs emerge later, in April to early May. When bears emerge from hibernation, they look for food and often feed on elk and bison that died over the winter. Sometimes, bears will react aggressively while feeding on carcasses.

All of Yellowstone National Park is bear country: from the deepest backcountry to the boardwalks around Old Faithful. Your safety cannot be guaranteed, but you can play an active role in protecting yourself and the bears people come here to enjoy by following these guidelines:

“Many Yellowstone visitors are deeply passionate about the conservation of park bears,” says Kerry Gunther, the park’s bear management specialist. “Reducing human-bear conflicts by preventing bears from obtaining food and garbage, hiking in groups of three or more people, carrying bear spray, and making noise in blind spots on the trail are the best way for visitors to protect bears while recreating in the park.”

While firearms are allowed in the park, the discharge of a firearm by visitors is a violation of park regulations. Bear spray has proven effective in deterring bears defending cubs and food sources. It can also reduce the number of bears killed by people in self-defense.

After work I went to a class on winter tracking. The instructor was a forensic tracker. I think this was poetic just for all the people who have been in a Unix class that I gave. A lot of information coming at you fast. One amazing data point was that an adult male wolf can cover up to 26 feet feet in the air when they are at full speed. 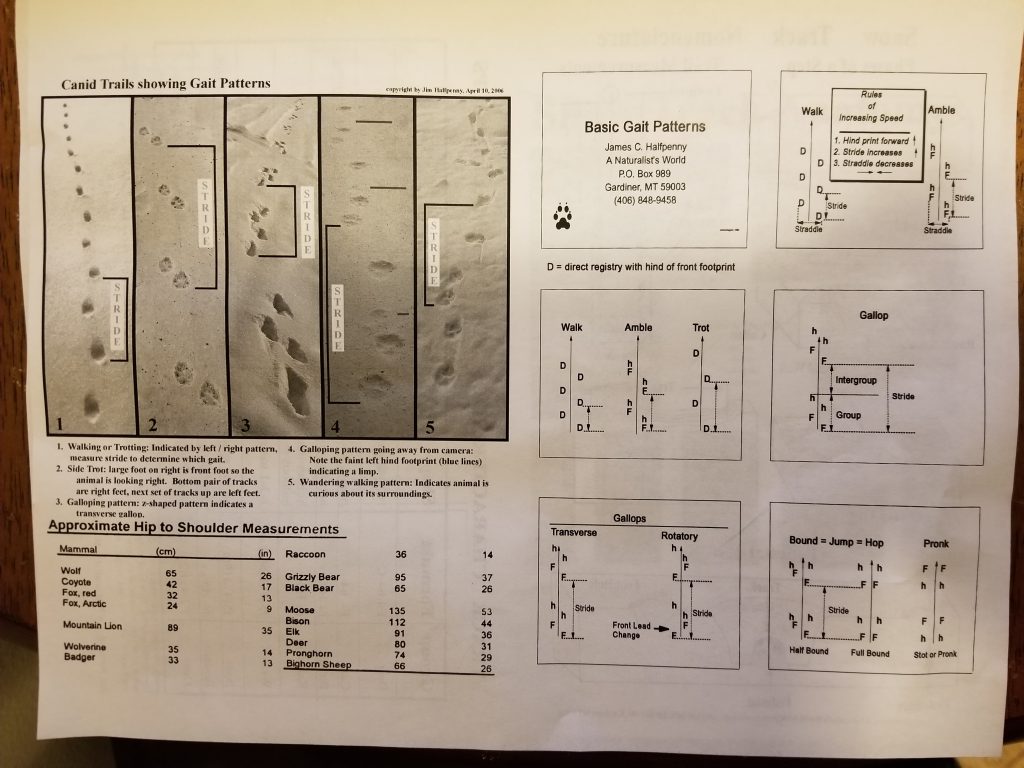 I learned that the picture of prints that I took from my lost hike on Saturday was most likely an otter. 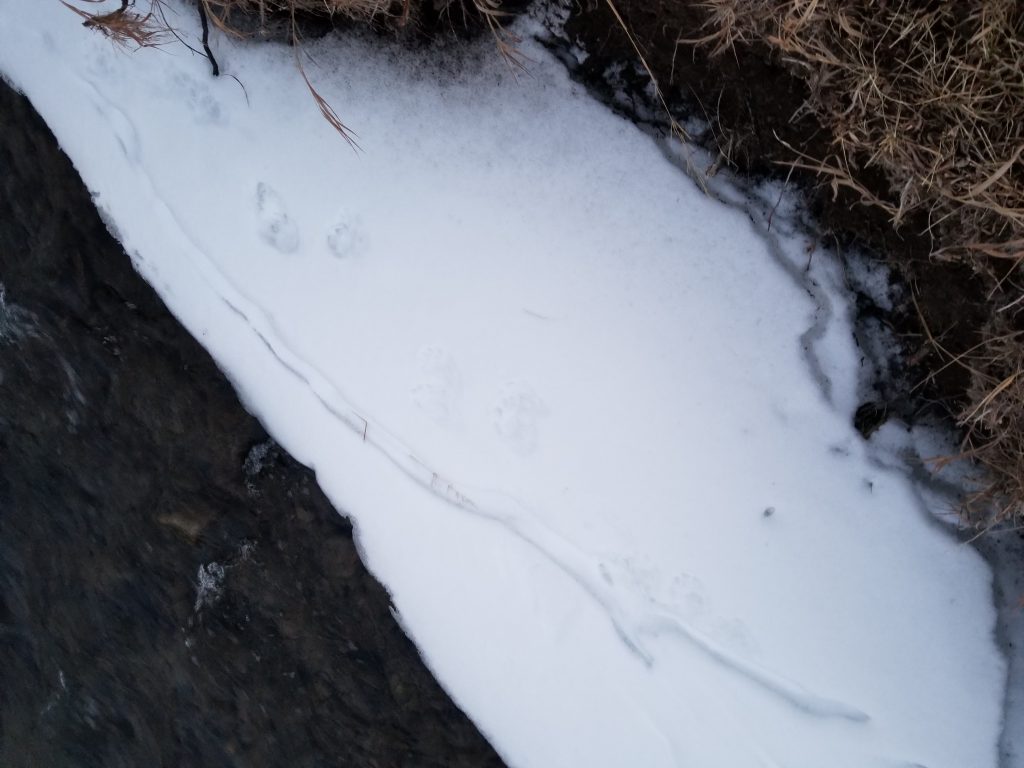 Last but not lest, after the class I received my can of bear off. I also learned that you want to wait until the grizzly is charging you and about 30 feet from you. Again I want to remind you that you are standing still and waiting for the 900 pound grizzly running at you to get just about 30 feet away. At which time you are spray for 1 full second. I learned that you just want spray a little that first time because if it doesn’t phase him and assuming you haven’t sprayed yourself, oh and by the way you haven’t passed out. If he is still coming you should unload the can directly into his face and then run. If he turned back on the first spray then you are ready to spray again when he decides to charge again. A data point for reference, if you are hiking in the winter one can “should” be enough. During the spring and summer you should have two cans. Last point of instruction is to have the spray very handy. Being in your backpack will not give you enough time if Mr. Grizzly is charging.  “Bear in Mind”. 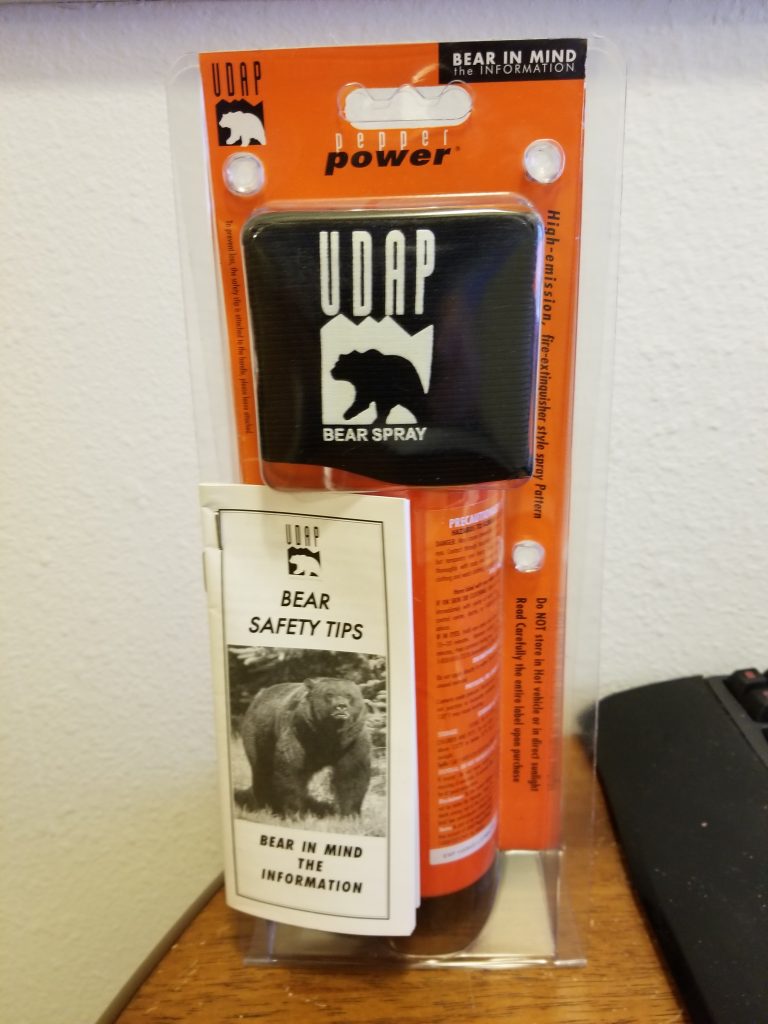 I had to learn to cook since no Chick-fil-A trip with Janet this Saturday. So I made mini-waffles with the super cool waffle maker Janet gave me for Christmas. 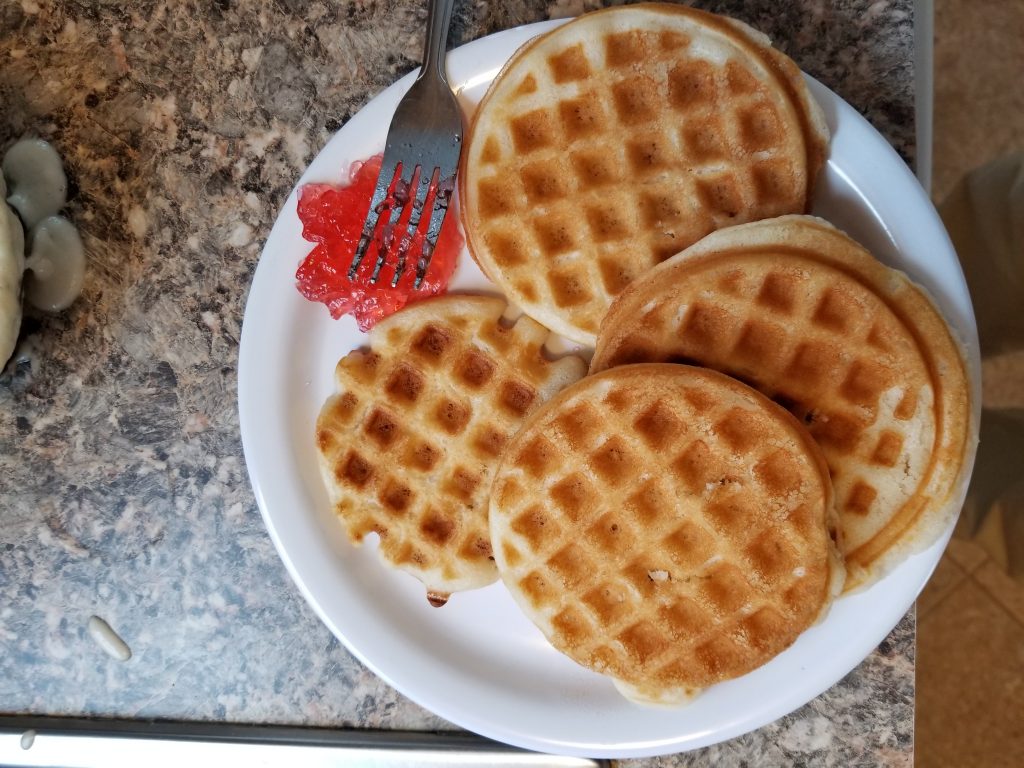 Since I don’t get trash pickup at home I have to drop it off. I was told last night that you need to make sure you only do trash drop off during the day due to bears.  So I am off to the trash dump. 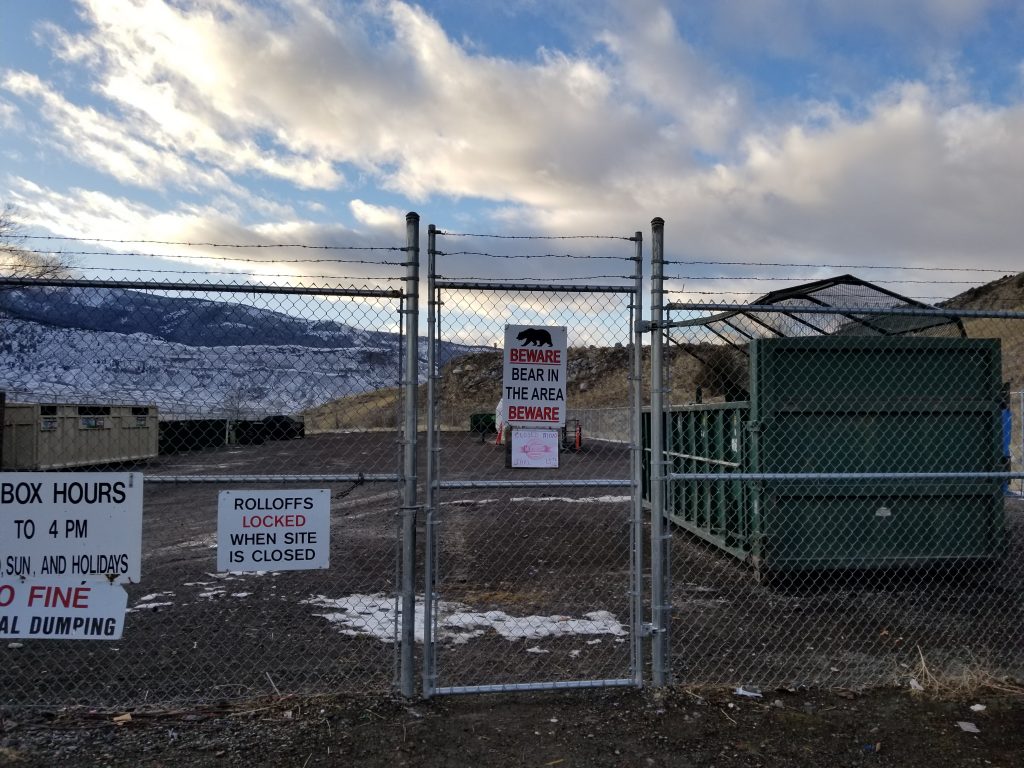 Followed that up will a little walk in the park. 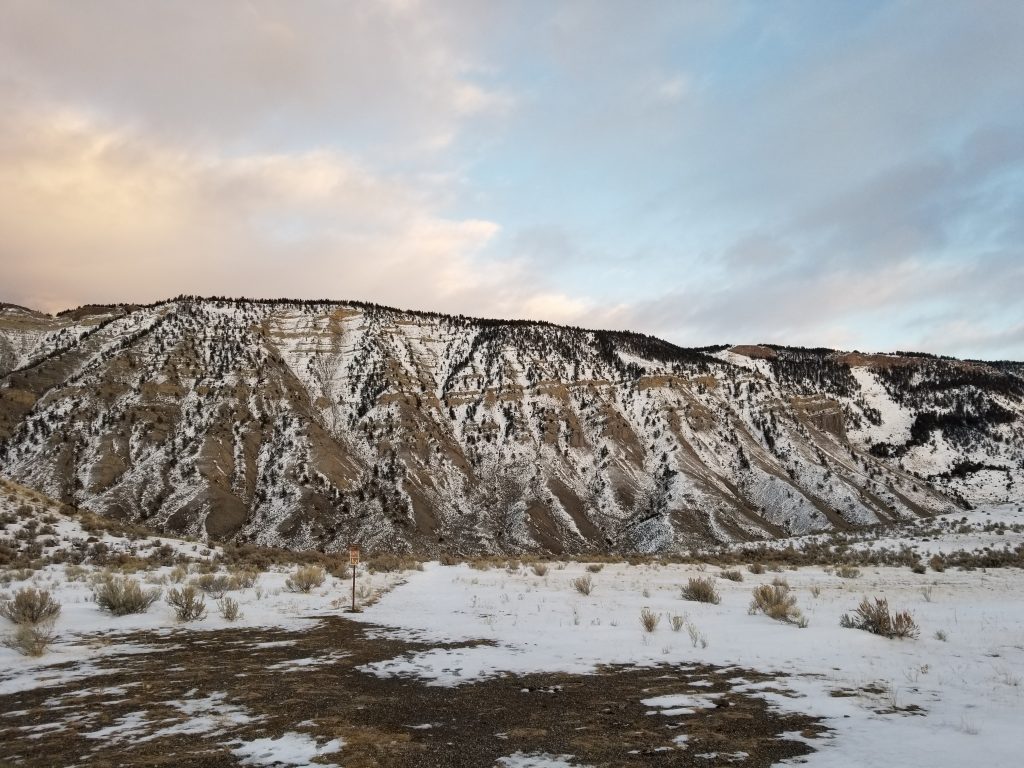 Went down to the river. 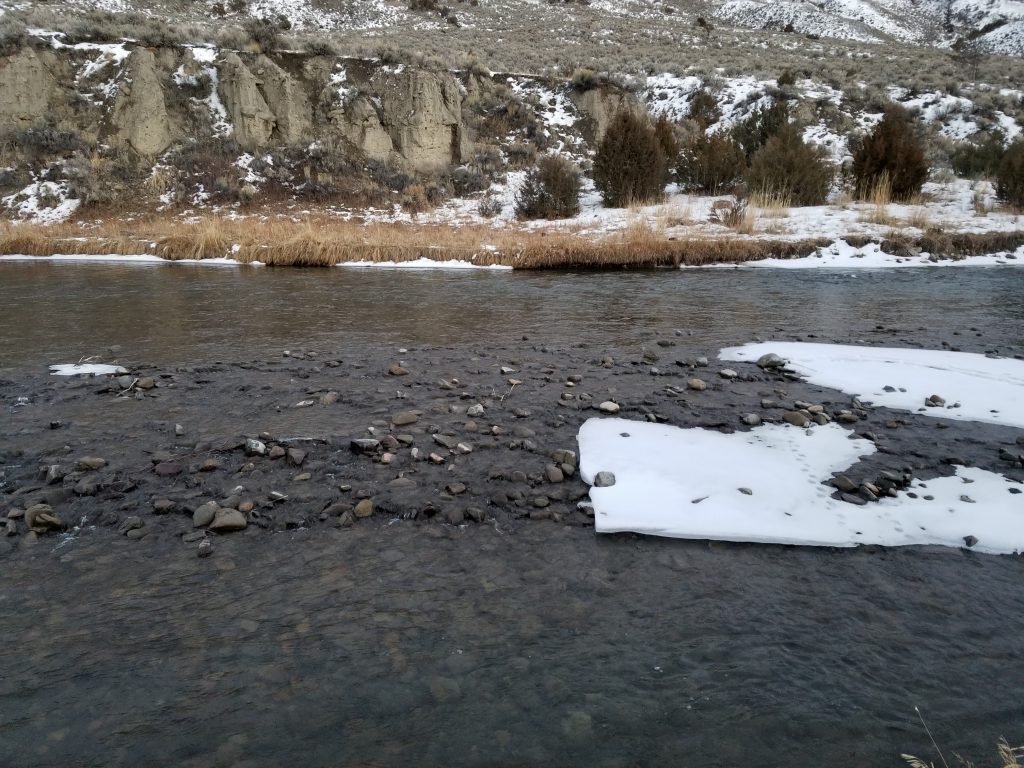 Have to watch your step. 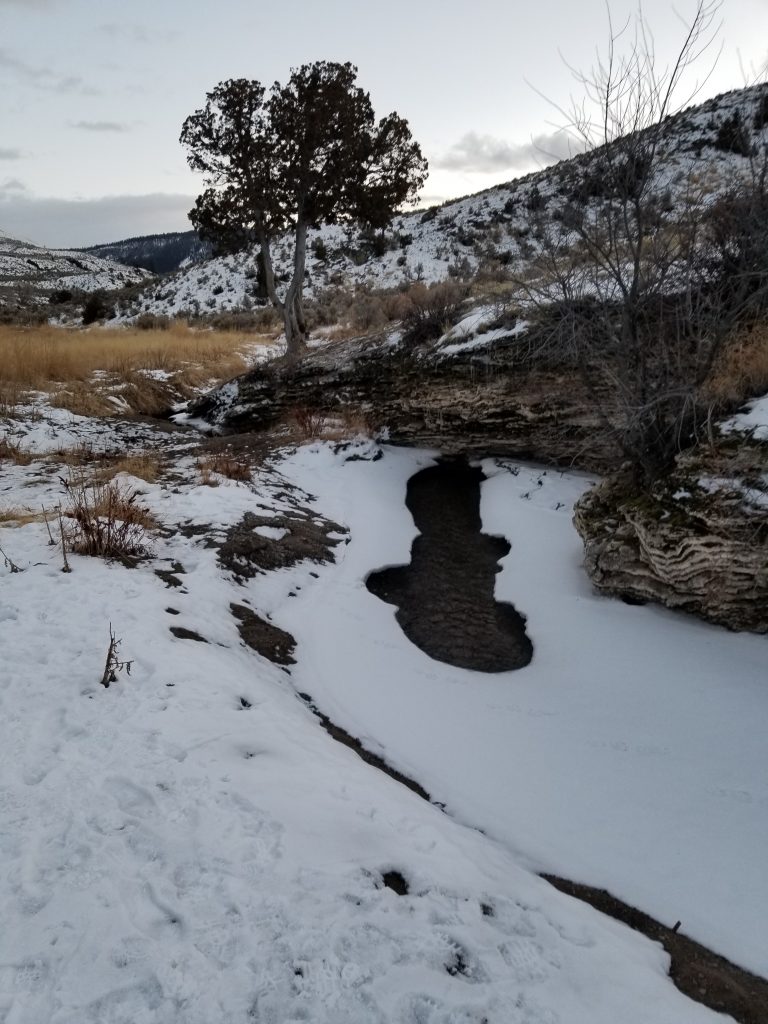 Think I need to learn more about tracks (wolf, coyote, or bear).

Go to start back to the car. Think I am a little lost. Was it that hill I came over? Think I see my elk friends looking at me in disgust again due to my lack of skills. 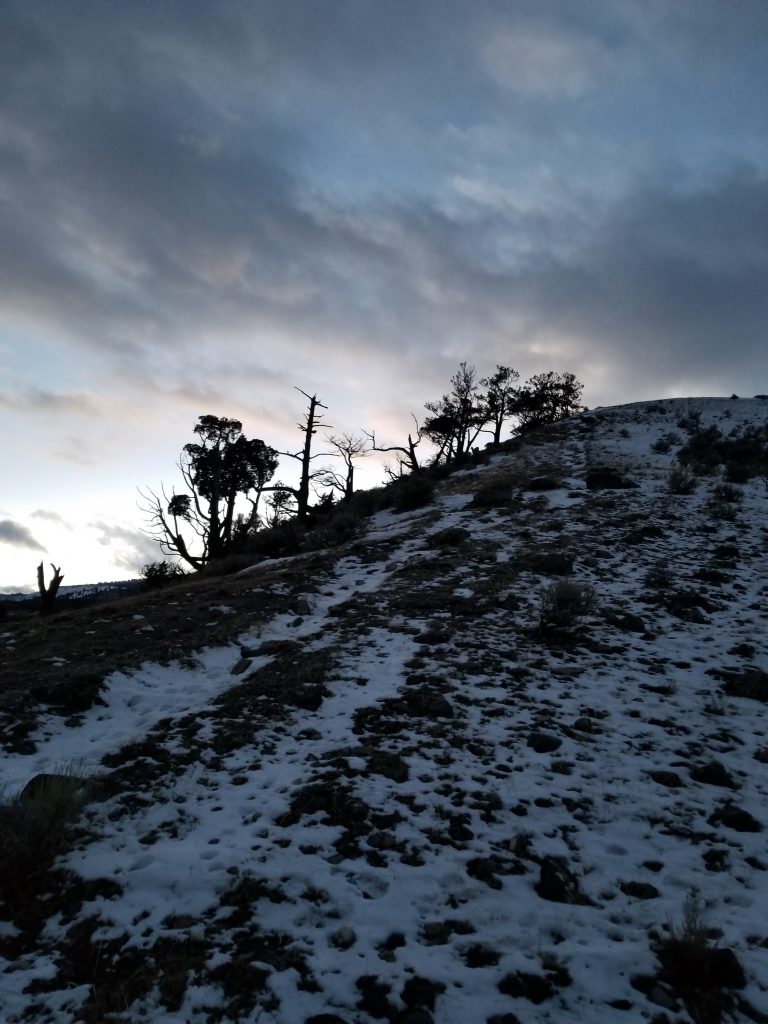 No I think it was that hill? 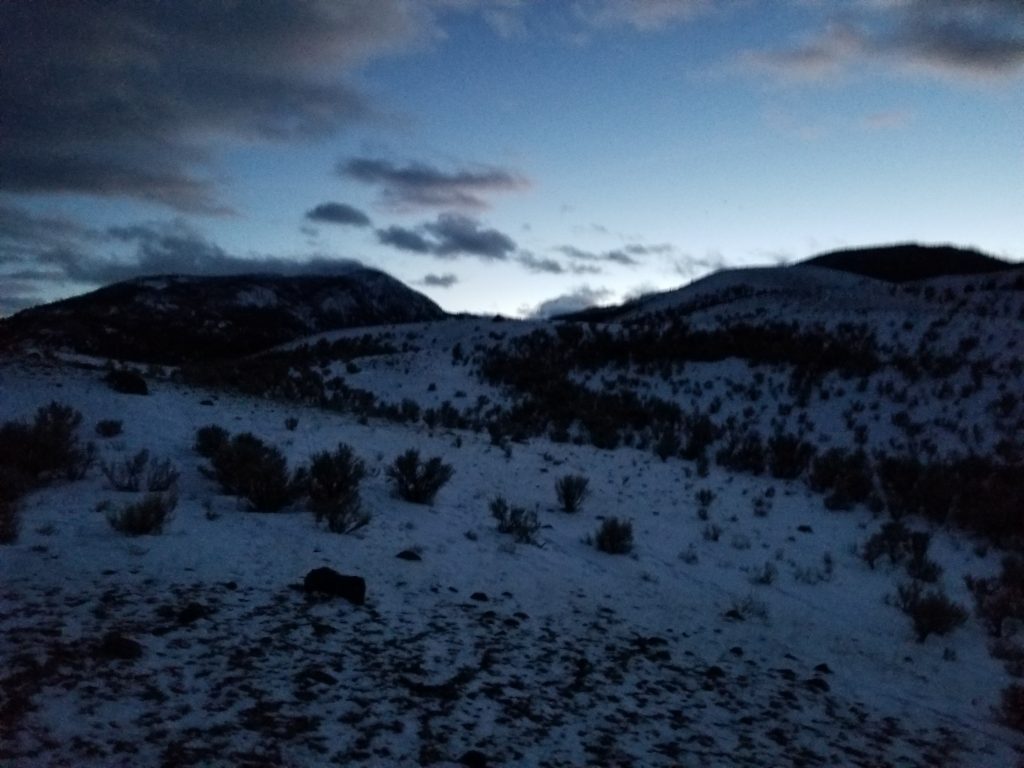 Wow, what a view as I walk around lost. 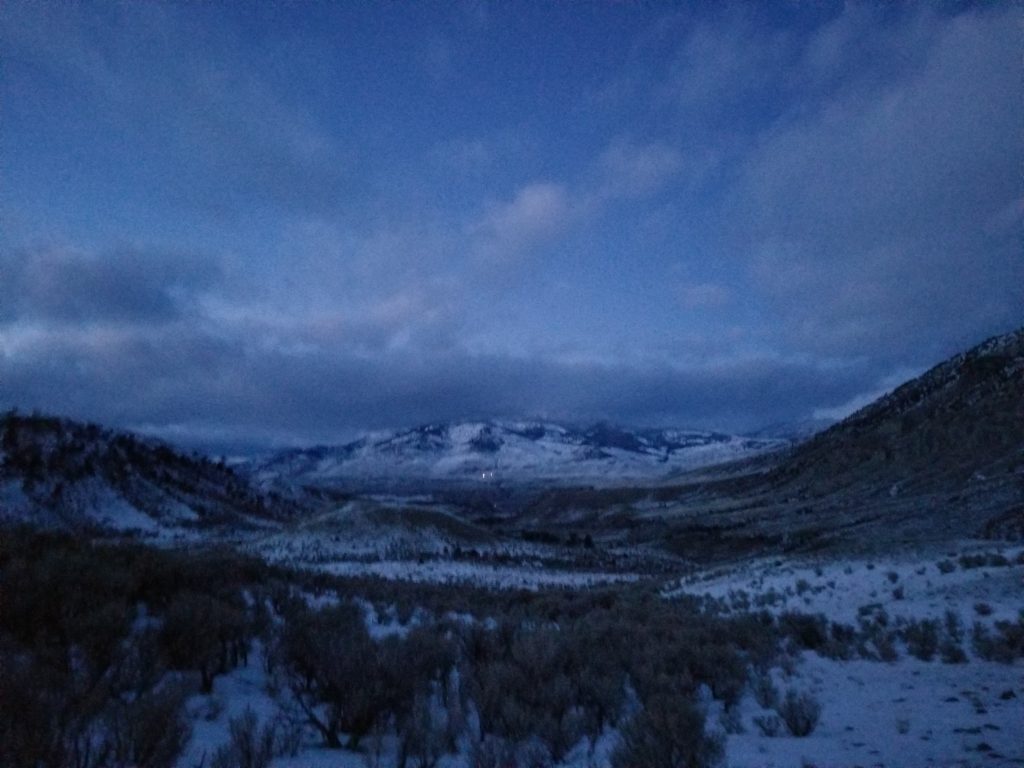 Ah, car lights. I am saved. I see my car from the lights of the cars going by. I was just a little off. 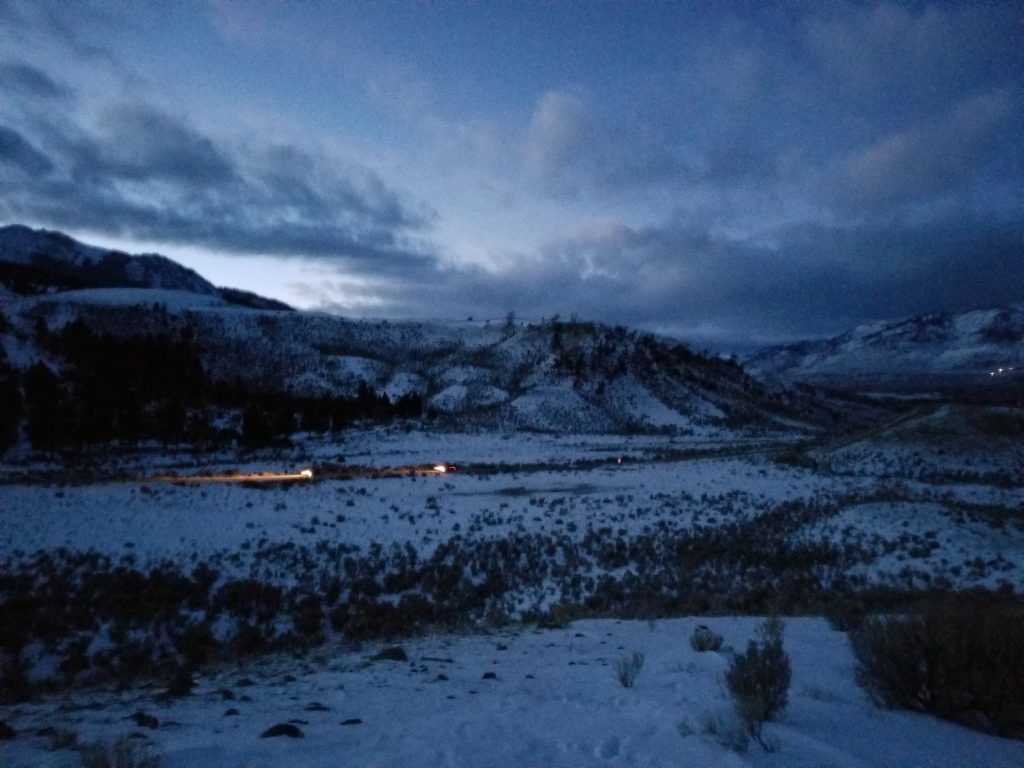 Got home and the night sky is so clear I can see the Milky Way. The stars are so bright. The stars at night are big and bright, deep in the heart of Texas. Wait I am in Montana. I wish Janet could see them. A picture just doesn’t show the grandeur.  I miss Janet.